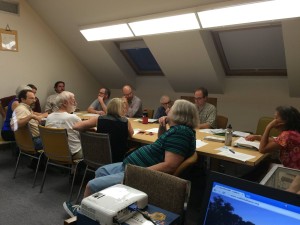 Twelve of the nineteen people who came to this week’s meeting of the Alliance (Southern Ulster Chapter). To join our email list, send a blank email to wallkill+subscribe@googlegroups.com. Photo by Emily Vail

Here are Dan Shapley’s notes on the meeting:

SUGGESTION: Working group reports should include statement about next working group meeting dates, so they can be reported out with these notes.

Administration
• Fiscal Sponsorship: Jason reported on search for a fiscal sponsor. Open Space Institute has a program to sponsor groups like this, but also has restrictions about activism and lawsuits. Jason has explored several other options without luck, including Hudson River Watershed Alliance, Orange Land Trust and Orange County Citizens.
• By-laws: WRWA will vote on bylaws at the September meeting, so read them now. Jason said the three key issues are: Who is defined as a member, who gets to vote, and how will leadership change. His recommendation: Members defined by category (individual, active participant, municipality, business, etc.); voting by those who do the work (ie, working group members); leadership decisions TBD
• Policy Working Group: The first rule of the policy working group is there is no policy working group. But there should be. There are many options for progress at municipal, state levels. The group needs some more warm bodies with big brains.

Boat Brigades (Brenda Bowers reporting)
• July Brigade: The third boat brigade had good turnout, with 10-12 people. An inadequate silt fence, which ought to have presented construction-related erosion to the river, was faulty, and DEC responded and levied fines (according to Jacob O). Other potential problems were reported to MS4 officer in Rosendale.
• Goal-setting: The goals of the group include: developing a protocol for mapping outfalls, reporting issues and following up; developing proactive longterm relationships with municipalities and DEC, and avoiding bad reports of non-issues; getting more people out to enjoy the water, whether or not they are participants in the Boat Brigade working group; educating WRWA and the public about issues and how to report them, as well as “signs of normal activity” that need not be reported; lining up speakers to educate the group; exploring WAVE sampling and other sampling options
• August Brigade: Next boat brigade is TONIGHT (8/20) departing 5 p.m. from Sojourner Truth park in New Paltz, headed toward Rosendale.
• September Brigade: The Sept 13 brigade departs 4 p.m. from Popp Memorial Park in Wallkill (hamlet – Town of Shawangunk) Expect to portage around shallow area near Orange/Ulster line. The September brigade is to be filmed and brilliantly edited to make it seem even more exciting than it is.
• Algae: Discussion algal bloom (aka it’s not “chicken sh*t”) observations. Jillian Decker reported that in an initial analysis, she identified four algae species, none of them harmful, that thrive in nutrient-rich water, and are more typical of lakes than rivers. But the Wallkill is more like a long lake in this stretch, due to the dam in Dashville. These species are typically found in the water column, and may have been present at the surface because the water pools up at this location. Group discussed need for protocol for gathering good samples, Neil Bettez offered 20-mL bottles, and potential value in documenting photographically future algal blooms, since the Wallkill is listed as “stressed” for nutrients and it’s a violation of NYS water quality standards if nutrients produce nuisance-levels of algae. Discussion of sources of nutrients in the Wallkill, which likely include agriculture (organic farming doesn’t necessarily reduce nutrients, but good management of farms can reduce nutrient runoff) and wastewater and stormwater. Craig Chapman said he’d like to explore options that would improve access with a dock and provide ways to filter the algae off the water where it accumulates near the park.

Science (Neil Bettez reporting)
• Mapping: Group’s ambitious goals to create new maps is on hold, as a key partner has to attend to other projects and can’t volunteer time at present. Dan Shapley to introduce Neil to Orange County and Ulster County people who may be able to assist. Marty reported that Orange County Land Trust has reams of documents related to the previous Wallkill River Task Force effort, which was active roughly from 1995-2005.

North Orange Chapter (Jillian Decker reporting)
• FOWR: Group is recruiting speakers and breakout-session facilitators for an event modeled on the April Future of the Wallkill Event. Dates and place TBD, but the goal is Montgomery-area in late October, early November.

Outreach (Michael Neil O’Donnell reporting)
• Pamphlet/handout/bookmark: Goal stated to create a pamphlet for distribution at events like the Elting Library or New Paltz farmers markets. Options include a recreational access brochure, “what you can do” and/or a brochure about the WRWA. Consensus pointed toward a brochure that highlighted recreational opportunities to get people interested in and excited about the river, and give them access to inspire engagement on issues or with WRWA primarily through printed contact info/web address/etc. Dan Shapley reported that the OSI-Mohonk-Walkway Over the Hudson project to link rail trails with Shawangunk Ridge trails has so far not included Wallkill River trails/water access. There’s an opportunity to have a water access, such as that being promoted through the creation of a WRWA brochure, incorporated into this high-profile regional effort. Glenn Hoagland of Mohonk Preserve was receptive, and suggested outreach to the New Paltz Chamber of Commerce. Discussion included sharing knowledge of plans and potential for extending walking trails along the river and/or river access at/near the site of the new bridge in New Paltz. Mary McNamara said that steep-bank water-access issues are common to other waterways, including the Esopus, and that a good design developed here could be used elsewhere.
• Attrition: Jason stated the goal that the Outreach committee should recruit enough new members to make up for expected attrition. Attrition so far has been at an expected/not-unhealthy rate, with the kickoff event drawing 120 (it was stated that there were 200 attendees, but my notes show 120 attended), the first WRWA meeting drawing 40+, and subsequent meetings so far drawing about 20.
• Roving Meeting: Chapter to explore options for hosting meetings in other Watershed towns, not just New Paltz. Options discussed included Gardiner, Wallkill (hamlet) and Rosendale. Discussion of outreach to Bruderhof also discussed.
• Website: WRWA has a beautiful draft website, courtesy of Michael Neil O’Donnell: wallkillalliance.org . To offer ideas or update working group-information, contact mike@michaelneilodonnell.com
• Logo: Jason is working with pro-bono designer Katie Coates to develop designs for consideration at the next WRWA meeting. Goal is to make it simple because, “I want kids to be tagging this everywhere.”

Stormwater is also covered by SPDES. Stormwater pipes/culverts may or may not be covered by SPDES. Only some municipalities are covered, and even there only municipally-owned stormwater infrastructure is regulated, so some of the pipes we’ve seen on brigades coming from private property in MS4 communities are likely not regulated. (They still can’t pollute, so anything but water could be a concern, while flow alone may not be.) In addition to municipal (MS4 – municipal separate storm sewer system) regulations, stormwater from construction sites and industrial facilities is regulated. Municipalities have to meet 6 minimum controls, including IDDE – illicit discharge detection and elimination, which includes mapping outfalls and tracking connections to the sanitary (sewage) sewers, for instance.

PWL/WI – Priority Waterbodies List/ Waterbody Inventory. This is based on data and information, and guides the state in managing water. DEC is now looking at the Wallkill for updates to this list, owing in large part to the community interest demonstrated by the Future of the Wallkill event and the formation of WRWA.

Emily will hopefully distribute her slides.