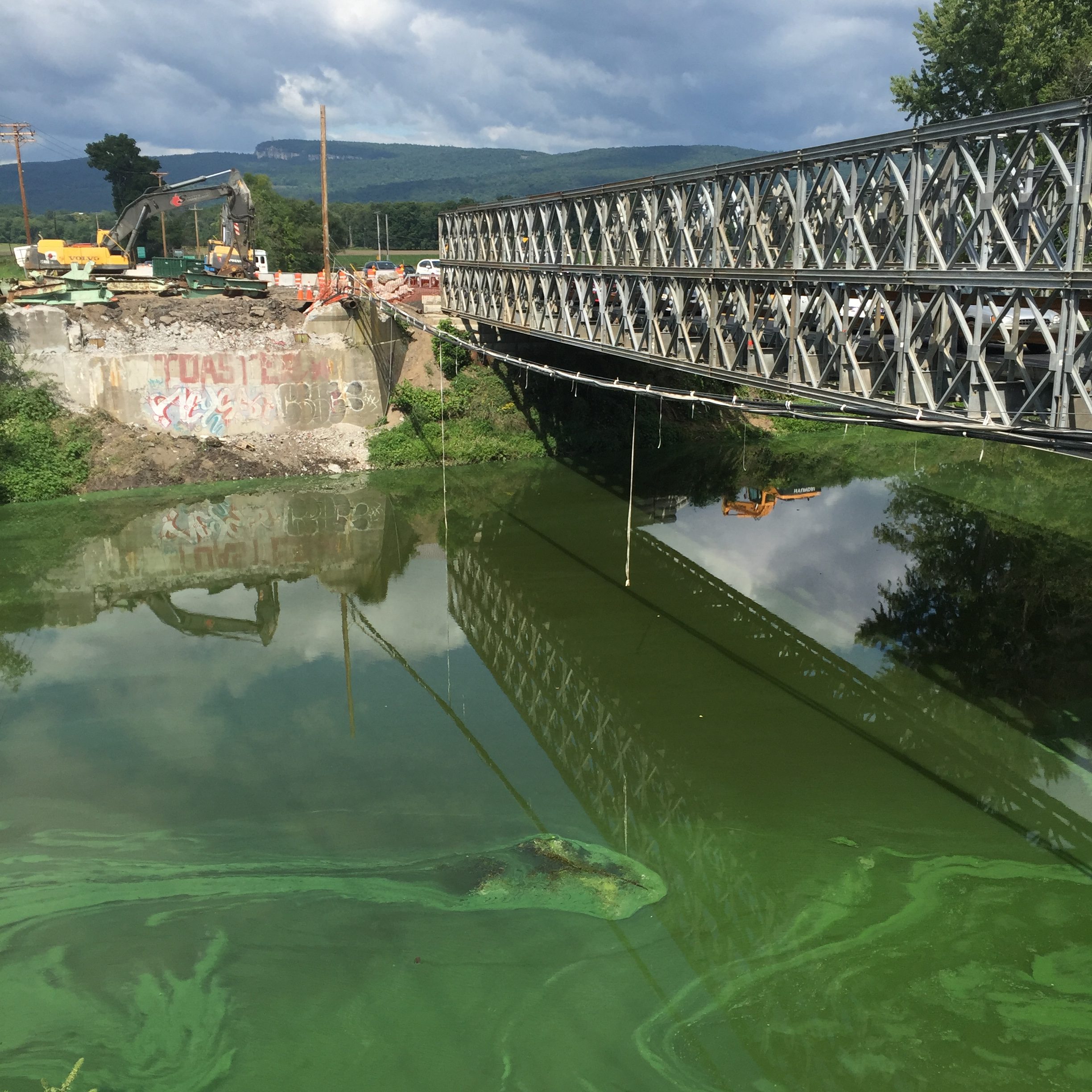 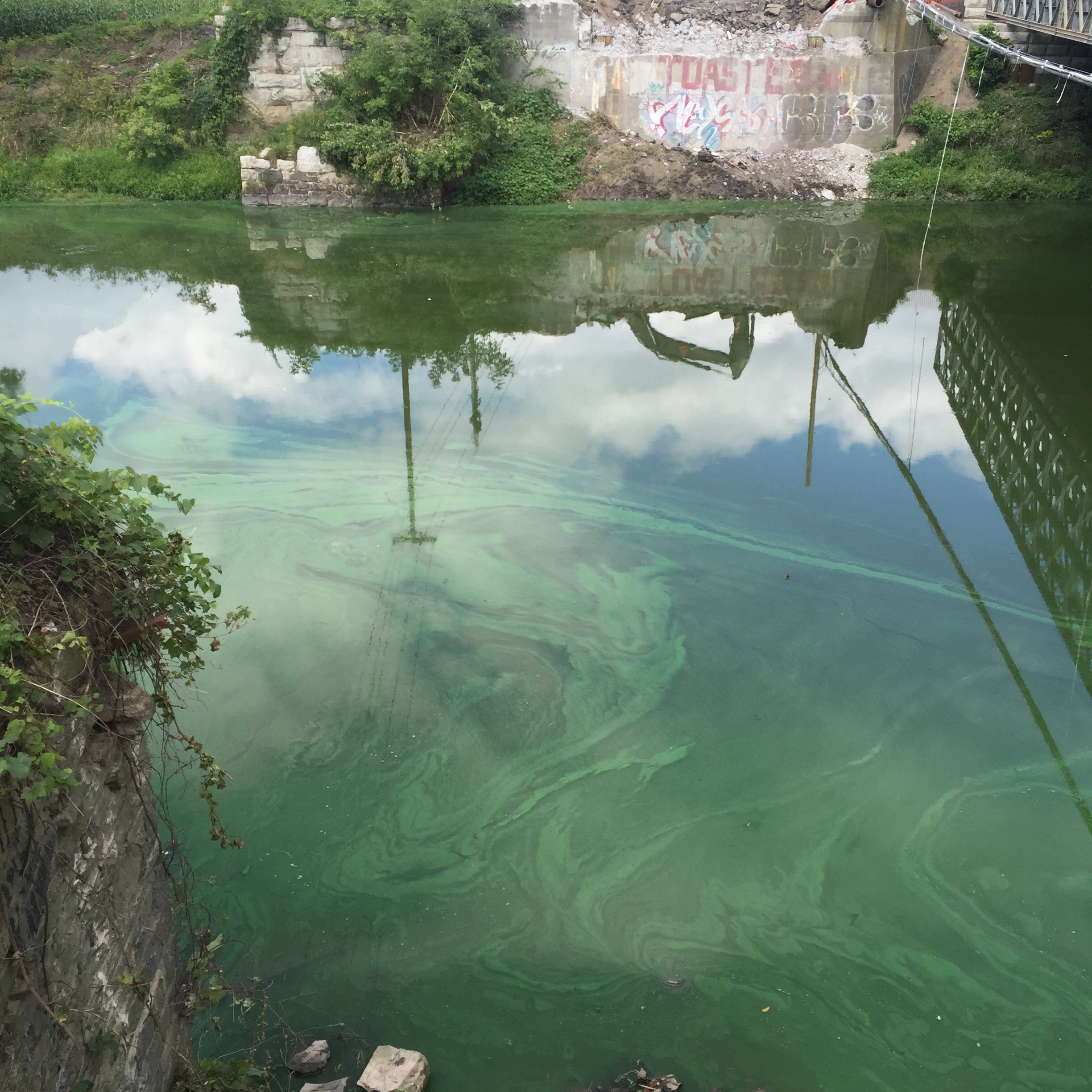 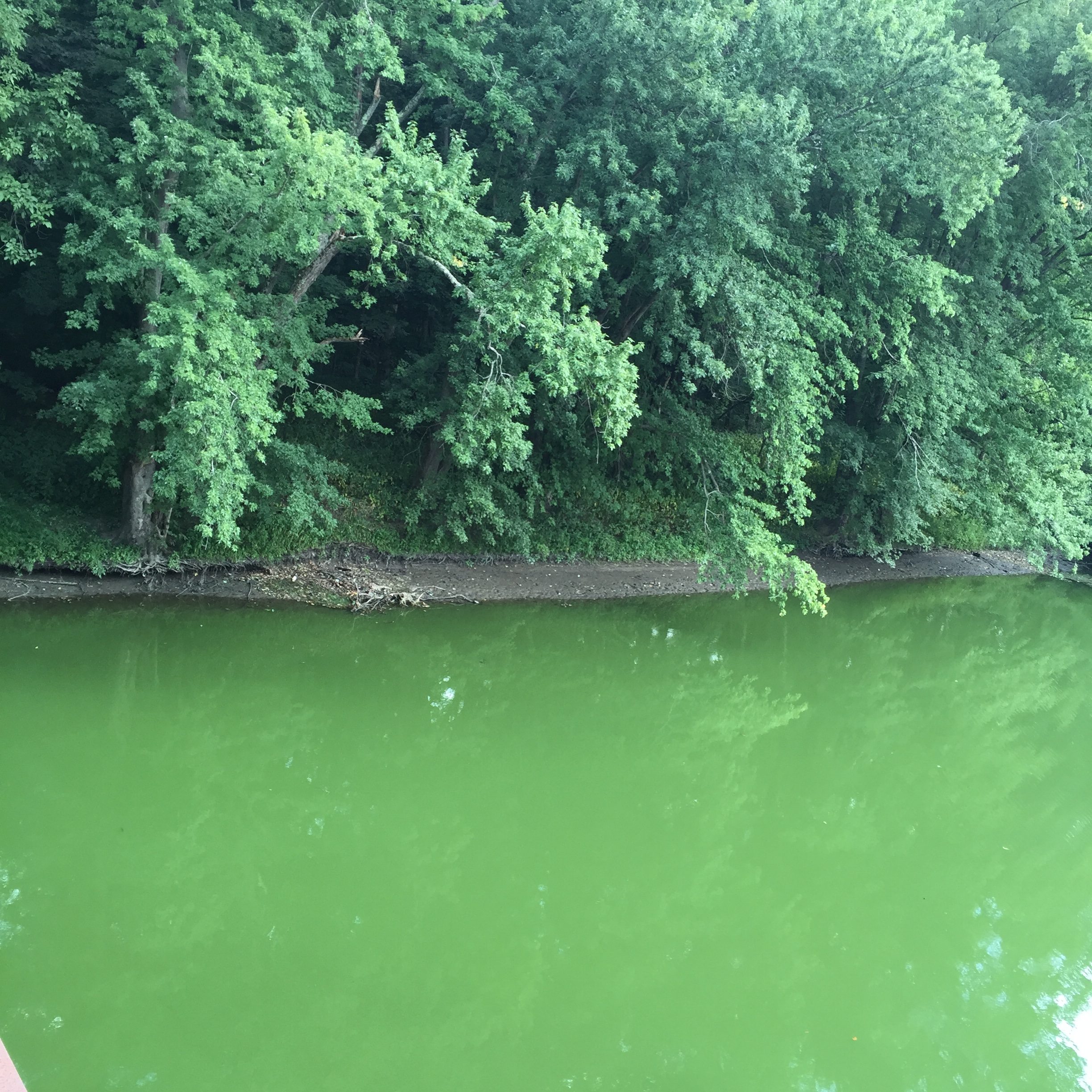 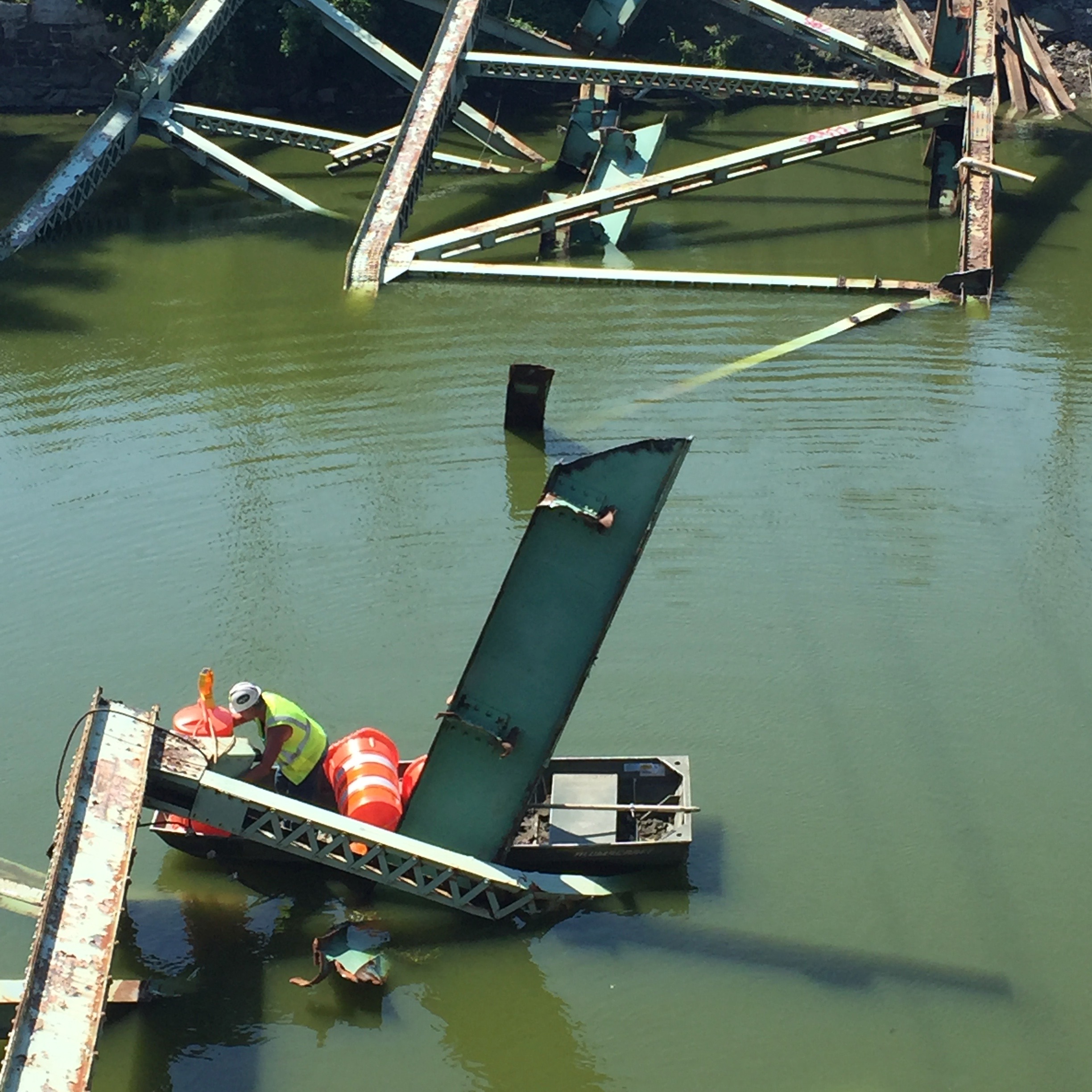 REPORT AN ALGAE BLOOM IN THE WALLKILL WATERSHED

FALL 2017
No Harmful Algae Blooms were observed this year.

OCTOBER 22nd, 2016
The bloom has affected as much as 30 miles of the river from Montgomery to its confluence with the Rondout Creek, over more than 50 days, from Aug. 24 through Oct. 22. Isolated observations have been made at other times and places on the river this year as well.

Analysis has confirmed the presence of toxins produced by the Harmful Algal Bloom in the Wallkill River. Samples taken by the Wallkill River Watershed Alliance and Riverkeeper, and analyzed through a Department of Environmental Conservation screening program, revealed toxins up to 25 times DEC’s “High Toxin” threshold.

The Wallkill River Watershed Alliance and Riverkeeper took multiple samples over several weeks, and sent several samples for analysis to SUNY College of Environmental Science and Forestry, as part of a Department of Environmental Conservation program to document and monitor Harmful Algal Blooms.

While algae are a natural part of any river ecosystem, a long-lasting widespread harmful algal bloom of this type — Mycrocystis, a cyanobacteria, also known as blue-green algae — in a river is not a purely natural condition. Conditions that lead to algal blooms such as this include high temperatures, slow or stagnant water, and excess nutrients in the water that could come from from sewage (both treated and untreated), urban runoff, and runoff of fertilizers from farms and lawns.

“This situation is appalling and deeply disturbing. By ignoring climate change and dumping large amounts of nutrients into the river, we’ve transformed it into a river of poison.” said Jason West, Director of the Wallkill River Watershed Alliance.

Dan Shapley, Riverkeeper’s Water Quality Program Manager, said: “This is the Wallkill River’s bright green plea for help. We are calling on local, state and federal officials to define the causes of this harmful algae, and to start healing this river.”

Wallkill River Watershed Alliance and Riverkeeper, in cooperation with DEC, will continue monitoring the algae until it dissipates.

DEC protocol recommends public notification based on the visual appearance of algae. Identification of the genus and toxins are additional confirmation that the algae was in fact harmful, but are not considered necessary prior to public notification. According to the DEC: “Because it is hard to tell a HAB from other non-harmful algae blooms, it is best to avoid swimming, boating, otherwise recreating in, or drinking water with a bloom. DEC strongly recommend avoiding all contact with any floating mats, scums, or discolored water.”

The extent of the river covered by algae has shifted somewhat from day to day, but has generally been present bank-to-bank in the stretch from New Paltz to Rifton since August 24. Algae has been observed as far upstream as Montgomery, and also in the Rondout Creek downstream of the confluence of the Wallkill – a stretch of more than 30 miles of river.

Public access locations within this section are numerous, and include Riverfront Park in Montgomery, Veteran’s Memorial Park in Walden, the Gardiner fishing access on Farmer’s Turnpike, the boat launch at the Ulster County Fairgrounds in Gardiner, the Village of New Paltz boat launch on Springtown Road, the New Paltz community gardens, the Wallkill River Valley Rail Trail bridge crossing, the DEC boat launch in Town of Rosendale, Perrine’s Bridge Park in Town of Esopus, the DEC fishing access site on Creek Locks Road in Town of Ulster, and several informal access sites used by anglers. The private beach at Central Hudson’s recreational facility on Sturgeon Pond has been closed since August 25, on the advice of the Ulster County Department of Health.

Toxins produced by Microcystis can be harmful to people, dogs or other pets, livestock and wildlife. Exposure may result from ingestion, skin contact or inhalation. If people or pets are exposed, they should be rinse with clean water immediately. Health effects from exposure may include skin irritation, fever, nausea and vomiting, or more serious health problems, including neurological and liver damage. The most serious symptoms are likely to result from exposure by ingestion.

In addition to human health effects, large algal blooms can stress or kill fish and other aquatic life, particularly as algae die and decompose, consuming oxygen that aquatic life needs to survive.

Those who observe a suspicious algal bloom on the Wallkill River, are asked to send photographs in an email to wallkillalliance@gmail.com, and use the Wallkill River Watershed Alliance’s Harmful Algal Bloom reporting form (http://www.riverkeeper.org/wp-content/uploads/2016/06/Wallkill-River-Watershed-Alliance_Harmful-Algal-Bloom-Monitoring-Program.pdf) to document it.

The community science projects that made these Wallkill River observations possible are funded in part by the Environmental Protection Fund, via the Hudson River Estuary Program.

June 2016: Wallkill River Watershed Alliance and Riverkeeper begin monthly monitoring of the Wallkill River for nutrients and algae, working with a grant from the NYS Environmental Protection Fund, via the DEC’s Hudson River Estuary Program.

August 15, 2016: Algae was observed in the Rifton area. Samples analyzed by SUNY Rockland and SUNY Ulster biologists working with the Wallkill River Watershed Alliance confirmed the presence of the genus Microcystis, a potentially harmful cyanobacteria also known as blue-green algae.

August 24, 2016: An algae bloom affecting a stretch of the river from New Paltz to Rifton was first observed. Analysis by SUNY Rockland and SUNY Ulster biologists confirmed the presence of Microcystis.

September 7, 2016: Department of Environmental Conservation communicates results of same three samples, analyzed by SUNY ESF for levels of microcystin, a toxin produced by some strains of Microsystis species. The two samples taken at Sojourner Truth Park in New Paltz exhibited levels of microsystin, a toxin, above the DEC “high toxin” threshold of 20 μg/l, with levels of 517 μg/l from a sample taken on August 26 and 269 μg/l from a sample taken on August 29. The Rifton sample showed detectable levels at 3 μg/l, below the DEC threshold.

ADDITIONAL INFORMATION FOR THE PUBLIC